This nights recital will focus on the music of 19th century composer & performer Guglielmo Enrico Lardelli, featuring the Mina Waltz,
written and published by Mr. Lardelli, organist of St Mary’s Church Maitland.
Other works on the night will include Australian composers.
A bio on Erin Sweetman, pianist

The story of the Collard & Collard – the piano was accepted reluctantly as there were already a large number of pianos lounging around the studio not doing much at all.
The previous owner had sold their house and was desperate to see it go to a good home, or any home for that matter. The studio was promised they would love it when they saw it despite the state of its insides.

Dating Collards & Collards is notoriously tricky but it is likely made in the 1840’s. There was a similar piano at the heritage listed 1827 Vaucluse house in Sydney.


The Collard & Collard company was originally started by Longman & Broderip, originally a publishing company, in 1767 in Cheapside London. The famous composer & virtuoso piano player Muzio Clementi who published with the firm invested heavily and due to his fame and fortune the firm grew rapidly.

F. W. Collard was said to be a mechanical genius, and he was awarded several patents for piano design and construction, and instruments by the firm were a sensation across Europe. Muzio Clementi retired by 1815 and the name of the firm was changed to Collard & Collard.

During the middle 19th Century, the firm was managed by Charles Lukey Collard, and he continued to move the firm to the forefront of piano manufacturing in Europe, making Collard & Collard one of the most popular and successful European piano manufacturers of all time. In 1929, the firm was sold to the Chappel Piano Company of London, and the Collard & Collard name was produced until about 1960. information from antique piano shop

Kawai KG-3C Custom Made Conservatorium Grand Piano – excerpt from a review from pianotan.com:~ the lofty pinnacle of the KG Series, the KG-3C speaks with the transcendent character that has made it the definitive choice of the consummate professional. Although it is only a 6 footer, it has incomparable tone and extraordinary power that is the ultimate expression of the KG series excellence.
Its commanding presence graces the stage with authority and elegance while its surpassing tone and elegance are coveted by the world’s finest studios. KG-3C is capable of producing exceptional tone through the full range of musical expression – powerful. delicate, short, long, fast & slow.
High praise indeed!

Laffargue of New York Player Piano imported by W.H.Palings & Company:
The Laffargue Player Piano is currently undated but we do have this information from a descendant, Rebecca Paling from Piano Tuners Forum
W.P. Paling “was born in the Netherlands in 1825 and died in 1895. He sailed to Australia in 1853. He was a musician, merchant and philanthropist, and imported pianos from Europe (mainly France I think) to Australia. The company ran until the 1970’s”

The Laffargue Piano Company built pianos from 1896 – 1932, with offices and factories located on 134th Street Cypress Avenue & Southern Boulevarde in New York City. The company was driven out of business by the effects of stock market crash in 1929 and the Great Depression which followed. Today, second-hand piano sellers consider Laffargue Pianos to be of very good quality and they draw a good price especially when well restored
Laffargue Catalogue Abstract on Player Piano History which discusses the Player Piano and how “the device remains one of the most misunderstood musical instruments in the world”. 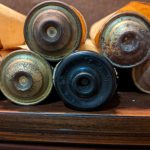 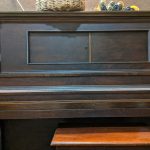 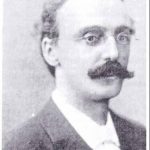 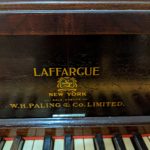 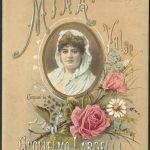 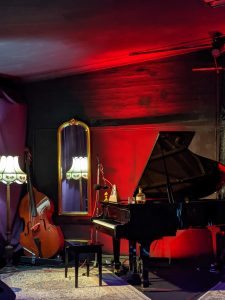 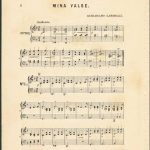 Recent (and not so recent) News